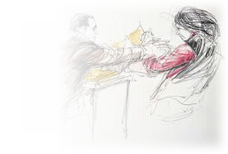 Interview with a Courtroom Sketch Artist

After the trial had concluded,
a courtroom sketch artist was interviewed by a reporter
across the street from the Hall of Justice
in Los Angeles, California.

As the courtroom sketch artist
​ was being interviewed,
she was smiling and friendly,
and holding her drawing pad under her arm.
​The reporter addresses the sketch artist by name.
Here is a portion of their conversation-
Reporter: "What do you think motivated these four people to do the things
they've been convicted of doing?"

Artist: "Well that's a difficult question. I don't know if anyone really knows"

Reporter: "What's behind it?
​
Artist: "I'd say possibly drugs could be, y'know, could be a major source
of the problem. I think (named defendant) being a habitual criminal
had something to do with it, and uh,
it's very difficult to say. I don't think anyone can
really, y'know, pin it down as to what caused it"
​
Reporter: "They seem to enjoy restating their position that they felt no remorse
over the killings. Is that really true, do you think?"
​
Artist: "Yes I really think that's true. When I saw them on the witness stand
they seemed to be, again, y'know, very care free, very uh, they seemed
to feel like they were right in what they did, that there was nothing
wrong with doing what they did, so uh, I dunno,
it's really kind of a sad situation..."

Reporter: "You sat in the courtroom with some of the top journalists from
all over the world covering the trial.
What's your opinion of them?

Artist: "I was very happy to know them"
​
Reporter: "What did you learn about news reporters
as you observed them operating,
you observed them interviewing attorneys
in the hallways and so on"
​
Artist: "Um, a very active group! (laughs), and they seem to be very thorough
in their job and I thought they did, from what I observed, I think
most of them did a very good job of reporting on the trial"
​
Reporter: "The publicity did not influence the jury in your opinion,
from your standpoint and from what you observed?"
​
Artist: "Not at all, not at all. I don't think it influenced the jury at all"
​
Reporter: "You saw the thing yourself each day as it unfolded and then
you got home at night and you heard the news reports,
you read the papers, was it generally treated very fairly or not?"
​
Artist: "Yes I think so, I really do, I think uh, everything that I observed
during the trial each day was uh, almost invariably very accurately
reported on and I can think of no instance where something
to the contrary was said on the news that actually did not
happen in the courtroom.  I know of no incidence"