Interview with the Sheriff

In December 1969,
the Sheriff was interviewed.
He is sitting at a desk in an office as he speaks to reporters.
The entire passage that follows was spoken by the Sheriff;

Sheriff: "We had been watching these so-called hippies
for some time and one evening the District Attorney
asked me and along with the Highway Patrol if they
would furnish us some men and some automobiles to go down and arrest
these hippies that they were on a car theft deal there,
they had been investigated for cars. They had stopped a car
in what we run as a 28 and 29, is who owns the cars and the
registrations of the cars so it's sent to C.I. and they
found out it was stolen. This is what they went in for.

So we furnished a car and two men for the north end of
Golar Wash, you can only get in, from, er, the east rather,
and the west and we furnished two men in a car from the east side
and one car and three men from the west side and they
went in and made the arrests.

The people from the east went on with them after they got there,
they had waited a couple hours and they found
some 27 people in there. Now, they did not find these all at once.
There was clothing, the labels torn out, some of it very expensive.

There's gasoline, one group there's 500 barrels, err, (pause),
5 barrels of 50 gallons each. There was clothing and food stashed
at various places. The kind of people they are, they did not
set 'em in (makes a setting down motion),
they just threw 'em in (makes a throwing motion) the bushes,
they were like someone had thrown some trash away.

Their food was cached in various places and in many places.
A particular thing about these people, most of the food
that they had stashed was candy, not what I would call staple foods
such as potatoes, beans, and what-not. It was mostly candy. 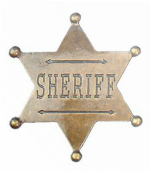 And this for my opinion only,
I think carbohydrates or sugar is our bigger menace right now
then marijuana will ever be.

All these people eat sugar, smoke marijuana, and act like children
from probably 13 to the 15 age group.
One girl told me that she had been through five years of college.
I told her I got the same degree, I went in five minutes,
I went through the front door and out the back.

This is the type of people you're having to deal with.
There's no mode of operation, you don't know what might happen to them.
They lived like animals not like people.
They have a great desire to run around in the nude,
both men and females.

In the jail here we've bathed them as they came in.
We started out with, if my memory serve me correctly,
it was 17 Los Angeles juveniles,
authorities took one the first night.
The rest of 'em were bathed and their hair was washed
and we gave 'em jail clothes and the Matron tells me that
when she went in each and every time that they were in the nude.

Whenever she had to have one to come out for interrogation
or see the lawyer why, had to wait to put their clothes on.
I suppose this is alright if you wanna live that way
but this seems to be their mode of life..."