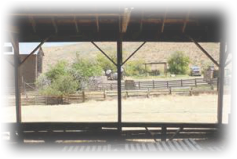 An NBC News film clip from December 1969
has footage of Spahn's Ranch.
As we view the footage, a reporter's voice-over tells us;

"This is where they lived. Among the stables, barns,
and phony buildings of an old run down movie location
20 miles from Los Angeles...
...They came and went,
and the number varied from 20 to 30..."

"...They were constantly taking dope and stealing cars
and just, they just sit around all day and sleep,
and that's about it.
They went around collecting garbage
and had that for dinner and went to the store once in a while,
and that was about it.
They just slept and got loaded..."

The person interviewed is identified on screen.