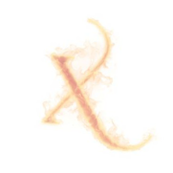 During the trial for the crimes of which they were accused,
Susan and her former associates
each emblazoned an X upon their foreheads.

The public's shock at their action reached epic proportions;

"For our part, throughout the trial,
we did everything possible to disrupt the legal process.
We shaved our heads to protest.
We fired our lawyers.
We loudly ridiculed and vilified the judge,
the prosecutors, society, everyone..." 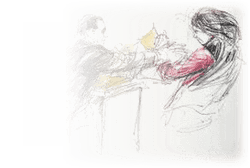 "...I even managed
​to knock prosecutor Bugliosi's stack of papers
and briefs onto the floor one day..."​

"...One of our most sensational acts,
for which I still bear the scar,
came near the end of the courtroom proceedings..."

"...The following weekend,
​Leslie, Pat, and I
used matches, red-hot bobby pins and needles
to burn X's into our foreheads....

"On March 29,
​ with shaved heads
and bloody crosses on our foreheads,
the four of us were escorted into
​ the courtroom for the verdicts.

In each case, the penalty was death.

I was immediately filled with fury.
Several things were spoken loudly
by the four of us.
​
I can only remember that I shouted out:
"Better lock your doors and watch your own kids!"

I was overcome with hate in that very instant
for those who had judged us.
I thought they had no right to judge me or anyone else.
They had done too many wrong things in their own lives.

They were my enemies.
​ I hated them.
​
And I was certain that the world would fall apart
just as we had proclaimed and that each of my enemies
​ would receive his just reward.

I had no realization of what had just happened to me-
no deep down realization that I was to be executed for my crimes.
​
Acceptance of that fact would take several weeks..."